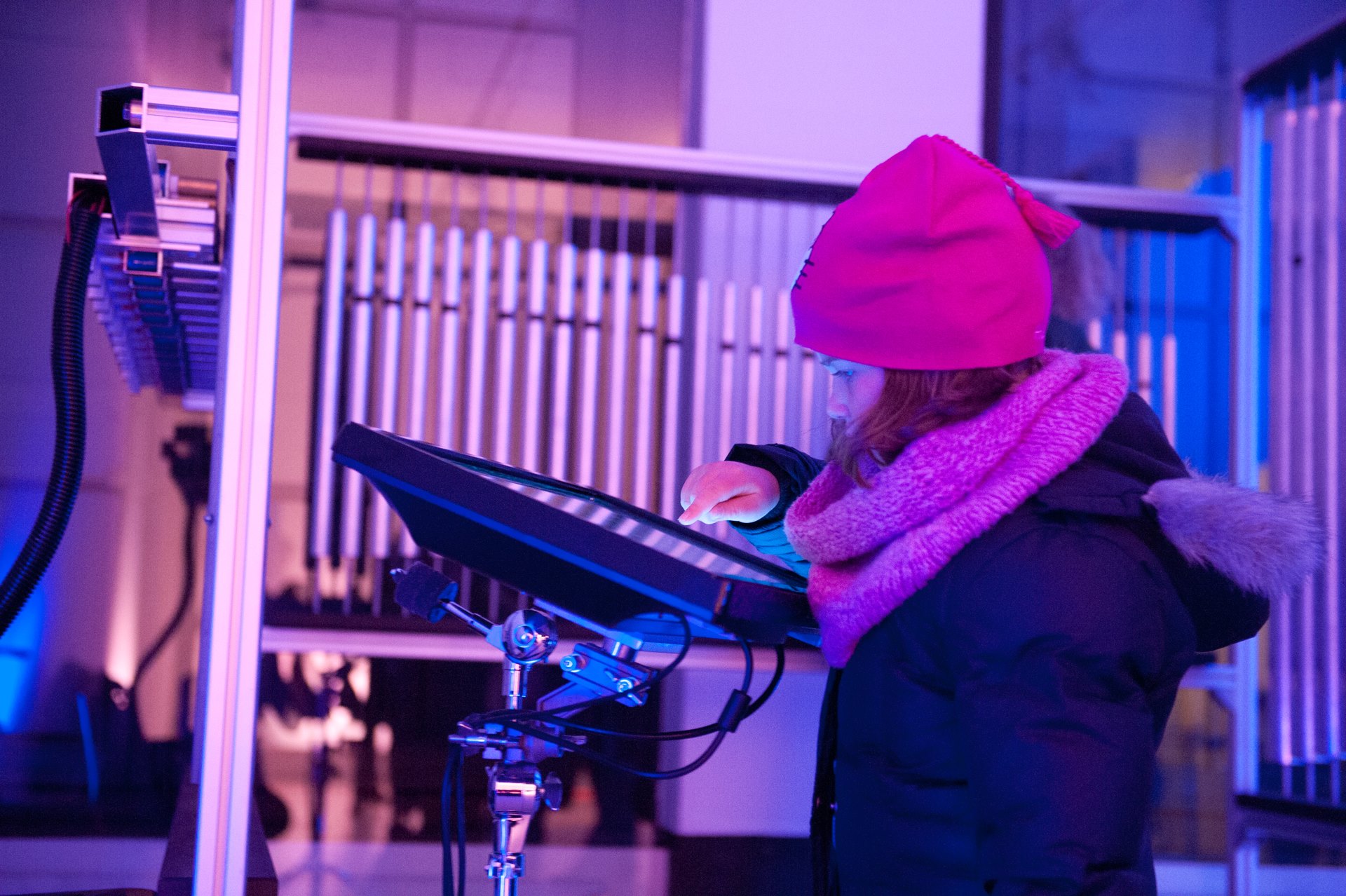 As part of an ongoing EPFL Sinlab project, the microtonal musical instrument solinophone, equipped with a new sequencer, is presented at the Swiss festival Les urbaines at Espace Arlaud in Lausanne, Switzerland. Les urbaines offers a unique cultural adventure in the universe of interdisciplinary emergent creations.

The sequencer was developed by founder Alain Crevoisier. The MIDI controlled tactile sequencer triggers automated hammers that ring the bells.

In a collaboration between Sinlab researchers Andrew Sempere and Hillary Sanctuary that uses smart motion sensors, your body becomes part of the musical landscape as it triggers ambient sounds or activates the hammers that play the solinophone's tubular bells. The solinophone is presented along with other Sinlab creative and technological installations. 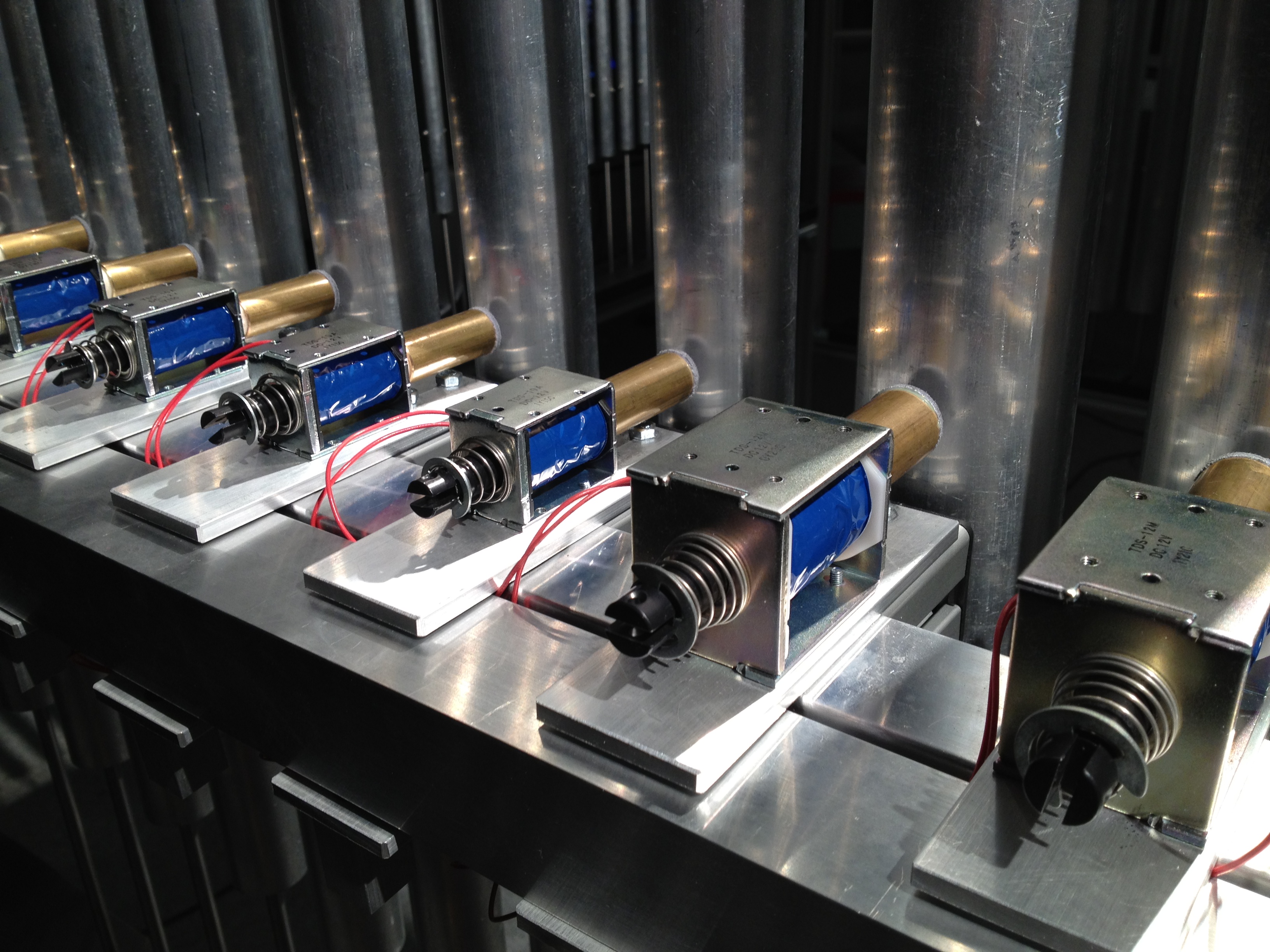 Lausanne, Switzerland. The solinophone will be present at the Music and Science Festival, dedicated this year to the theme of “Emotional Power”. The festival aims to encourage interdisciplinary collaboration in the arts and the sciences.

Crevoisier will host a workshop dedicated to the solinophone and its futuristic interactive capabilities. Equipped with MIDI controlled hammers, the prototype of the solinophone is easy to play using special software. The solinophone will be installed at Lausanne’s HEMU on November 17th. 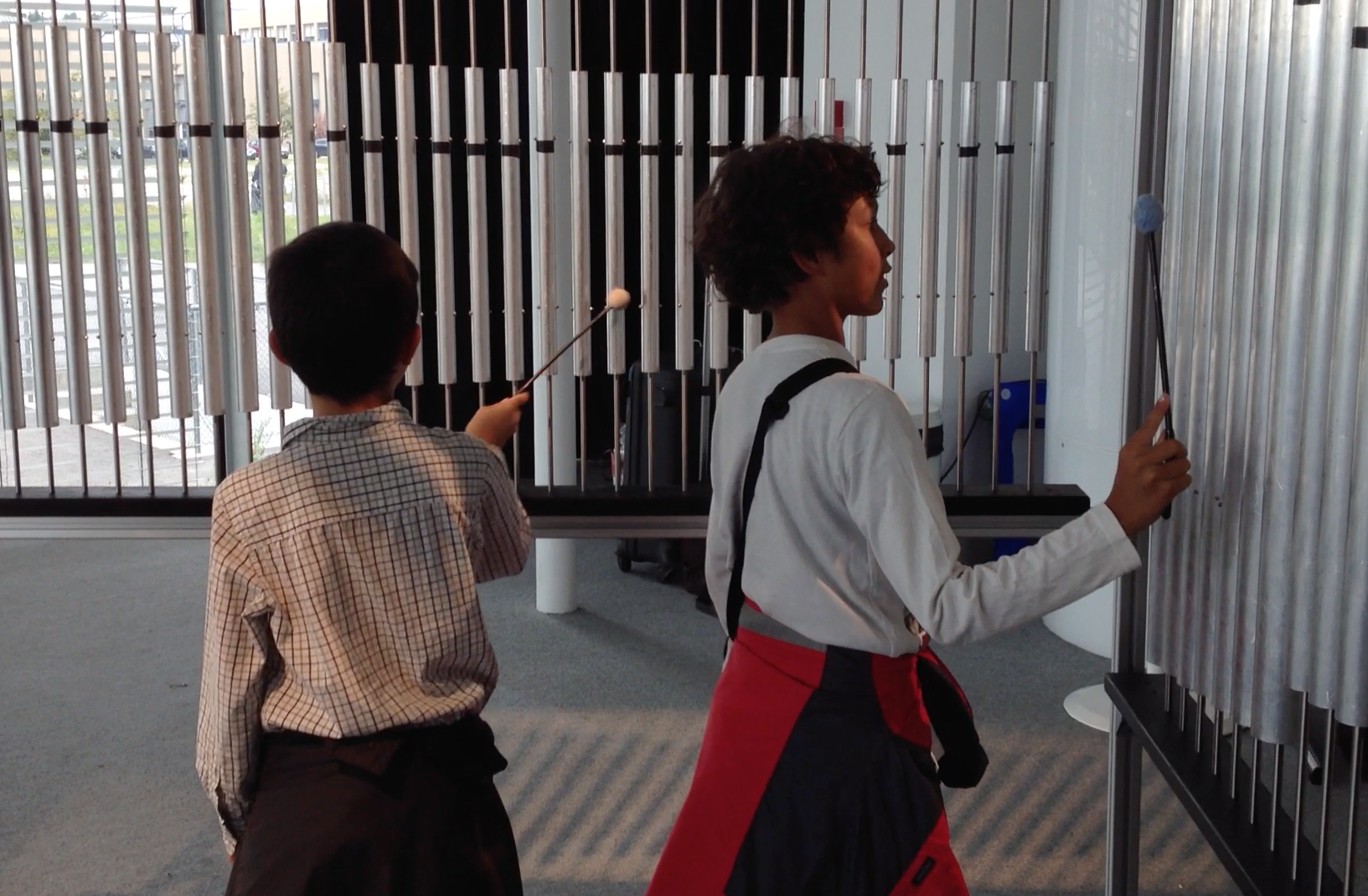 Lausanne, Switzerland. The solinophone was assembled at EPFL's Forum of the Rolex Learning Center for Lausanne and Pully's 12th edition of “La nuit des musées”, by invitation from Beatrix Boillat and her team at EPFL's cultural affairs. Many thanks to them for sponsoring the creation of the solinophone p

The solinophone will have the pleasure of sharing the Forum with ingenious acoustic installations, presented by Hervé Lissek and collaborators of the Acoustics Laboratory LEMA, all of which are part of the Montreux Jazz Digital Project. 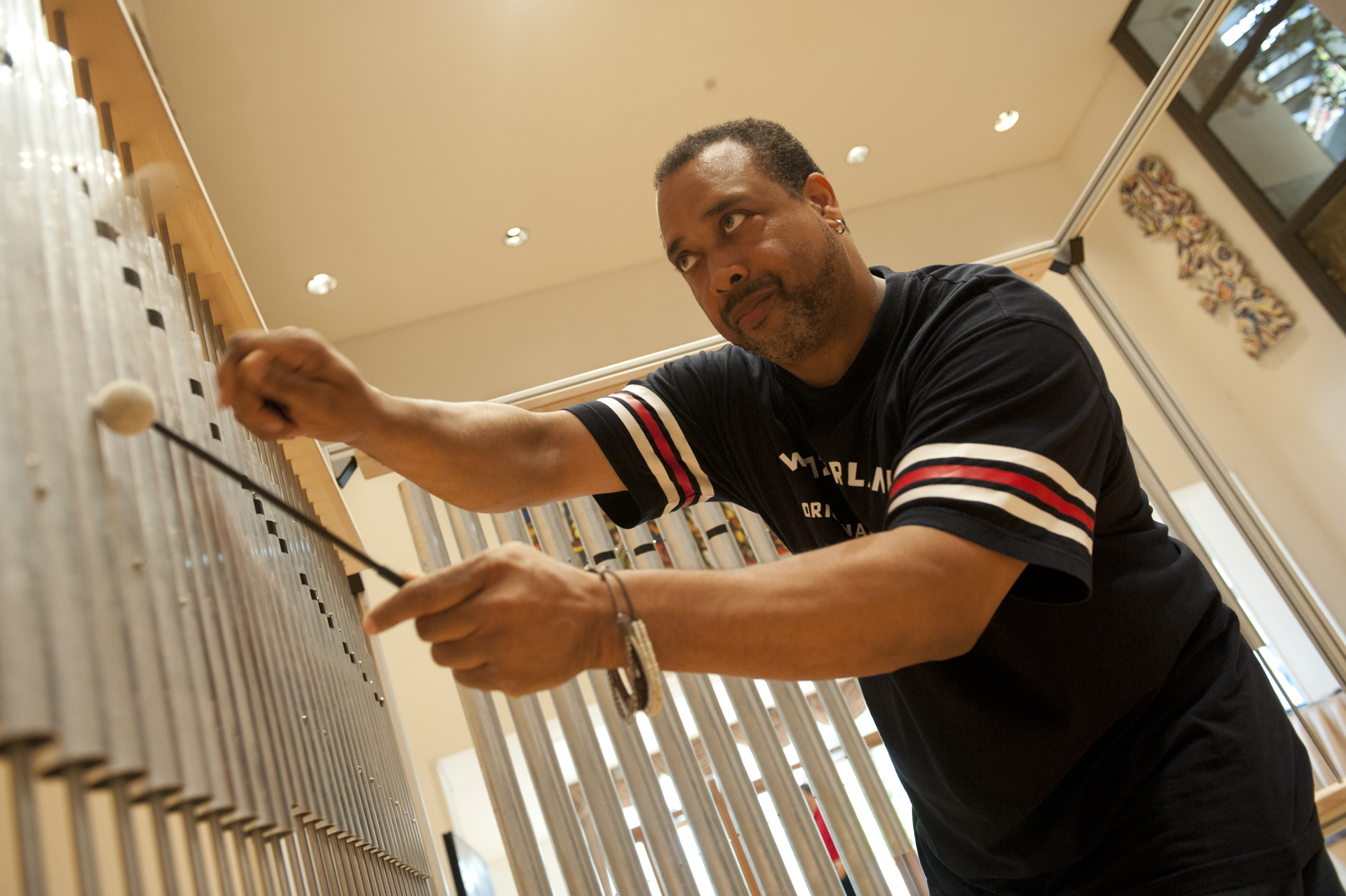 Montreux, Switzerland. The prototype of the solinophone was on display for the first time at the Montreux Jazz Festival from July 2 – 14.

Montreux Jazz visitors and professional musicians alike played the various bells, inside and outside of the massive instrument. Among the visitors were reknowned bassist Jerry Barnes of CHIC who enjoyed playing the bells. Many thanks to Stephanie Aloys-Moretti for the opportunity to present the solinophone at this venue.

After several intense weeks of building the instrument, the solinophone was finally assembled in the spectacular Petit Palais. The aluminium tubes were tuned with precision tools by EPFL's ATMX's expert engineers Pierre-André Despont, Werner Brönnimann and Adrien Grisendi. Physicist Hillary Sanctuary then checked the frequency of each bell in EPFL's anechoic chamber with the guidance of doctoral student Romain Boulandet at Hervé Lissek's Laboratory of Acoustics.

In the few weeks leading up to the festival, Pierre Weber and his team at Weber+Calibra found a way to set the bells vertically within three vertical sides of a framed cube. 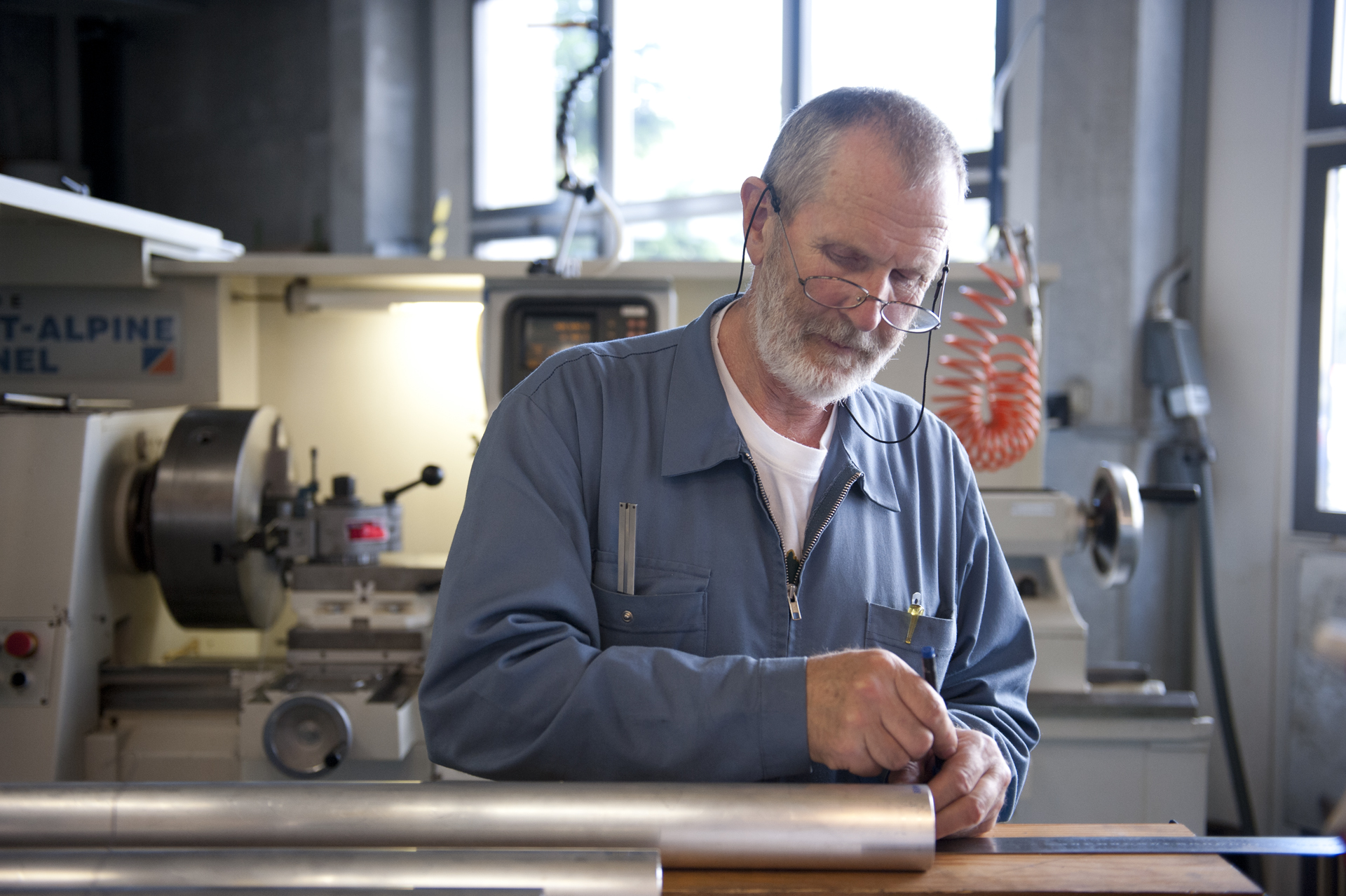 Lausanne, Switzerland. Many thanks to the people who contributed their valuable expertise to the realization of the solinophone prototype, all across Switzerland from the EPFL campus in Ecublens all the way to Sonceboz-Sombeval in the Swiss Jura.